Martin’s life completely changed in 2017 following a stroke which left him paralysed on his left side and left him immobile.

Keen to remain living in his own home with his family around him, Martin approached us for what was initially short-term respite care following his stroke. He formed strong relationships with both his carers, now he’s receiving full-time live-in support.

Matched because of both the carers (Stefan & Michael) interests, as soon as Martin, met and worked with them both, it was the start of a great relationship. Though, initially a little nervous, Martin, Stefan and Michael soon began to form a great bond. Both the carers strived to learn all they could about Martin, from his interests, what food he enjoys and integrating within the community – exactly what he actually wanted from the carers to live a fulfilling life.

Martin and his two carers have been working together for quite some time, they have shared some great achievements and everything has worked out better than expected for Martin. 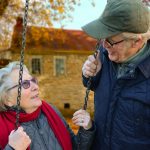